Movies are a fantastic way to escape into another world for a couple of hours, but they also hold the power to make us think and start conversations about topics such as survival and preparedness.

What follows is my list of ten nuclear war movies you should watch before it is too late.

The Manhattan Project is not a movie about nuclear war but about the nuclear weapons themselves. This was one of those movies that I would watch as a kid when it came on TV during a rainy lazy Saturday afternoon. 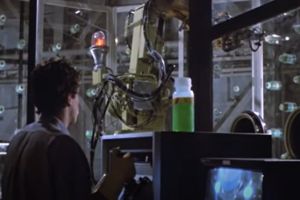 The plot centers around 17-year-old Paul and his girlfriend, who discover that a pharmaceutical company is secretly producing weapons-grade plutonium.

To expose this, Paul decides to steal some of the plutonium and build a working nuclear bomb for the national science fair.

Related: How To Build Your Nuclear War Survival Kit

I won’t spoil the plot any further, but this movie shows that it is entirely plausible for the right person to build an atomic weapon using publicly available information. 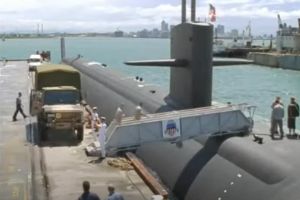 There are two versions of this movie based on the 1957 book written by Nevil Shute. The first film adaptation of the book was released in 1959, with another made-for-TV film being released in 2000.

The story takes place in Melbourne, Australia, after a nuclear war has decimated the northern hemisphere.

An American submarine docks at the city and brings news that the war has eliminated all life in the northern hemisphere. In addition, there are clouds of radioactive dust that are slowly working their way south.

The story examines how society might handle the knowledge that an unseen and intangible threat is at their doorstep.

It has been many years since I’ve watched this film, but I remember coming out of the experience and contemplating how I would react to knowing that humanity had only a few months left.

The Road is a bleak, depressing, and dark movie based on a 2006 book written by Cormac McCarthy. 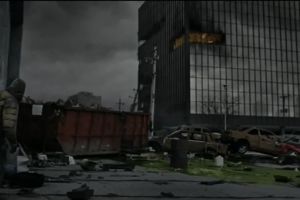 Having read the book and watched the movie, I can say that it is a very faithful adaptation of the source material. The plot follows a man and his son as they travel south along desolate interstate highways toward warmer climates and the ocean. Along the way, they encounter other survivors and face many challenges.

In addition, we get to see what ordinary people revert to after a cataclysm during their travels.

⇒ How To Build An Underground Bunker For Only $400

While neither the book nor the movie specifies the cataclysmic event, the setting bears striking similarities to a nuclear winter, so I chose to include it on this list.

Wargames is up there with The Manhattan Project as my favourite 80’s nuclear war movie. 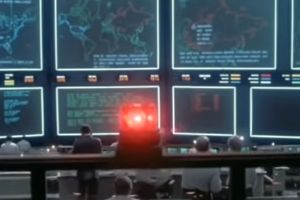 The plot follows a teenager named David who accidentally hacks into NORAD through a back door. He finds what he believes is a game called Global Thermonuclear War, but he doesn’t know that the system he has hacked into is not a video game company, and the game he is playing runs the risk of playing out in real life.

I like this film because it illustrates that sometimes the only thing that may prevent a nuclear exchange is a piece of software.

The Sum Of All Fears

Read the book if you had to choose between reading the Tom Clancy novel Sum Of All Fears or watching the 2002 movie of the same name. 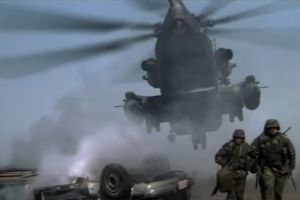 The book is far better, and I felt that I got more out of reading the book than I did watching the film.

The Sum Of All Fears plot revolves around a plan by terrorists to detonate a nuclear weapon at the Super Bowl while staging another attack on an aircraft carrier.

They hope this will lead to nuclear war between Russia and the United States.

This movie is another that does not involve a full-scale nuclear war but is an example of how easily we can find ourselves on the receiving end of Armageddon.

Crimson Tide is another movie with no active nuclear conflict but a narrowly averted one. 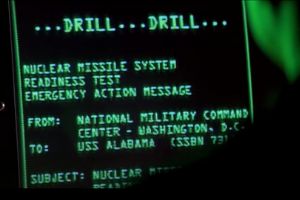 The plot of this film centers on the conflict between the Captain of an American nuclear submarine and his XO.

The dispute arises when they receive orders that get cut off, and the Captain wants to carry out a launch, but the XO wants to surface to confirm the message before starting World War Three.

This is a pretty good movie and an excellent examination of the people that are ultimately responsible for launching nuclear weapons at our enemies.

People of a particular vintage will remember the Cuban Missile Crisis. 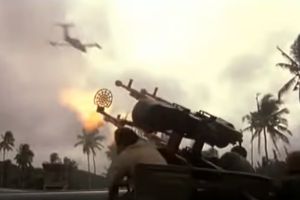 The movie Thirteen Days was released in December 2005 and is a good dramatization of the crisis’s events and how the two sides found a way to resolve the conflict without mutually assured destruction.

It has been a long while since I’ve watched this movie.

Related: 24 Movies That Will Teach You a Lot About Survival

But I found it very eye-opening, mostly because I never learned the particulars or how close we came to total destruction during those days. 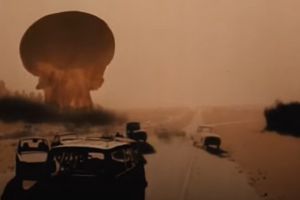 The Day After is a made-for-TV movie that takes place in a small Kansas town in the early 1980s.

The movie’s events involve an escalating conflict between the United States and Russia, whose climax is a full-scale nuclear exchange between the two nations.

The movie is a good examination of how people would react in the lead up to, during, and after a global war.

While the movie takes place in the early 80s, I think the messages it delivers are still valid today. 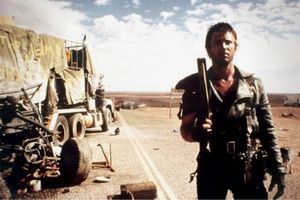 No list of post-apocalyptic movies would be complete without including The Road Warrior.

Mad Max 2 is the sequel to the original Mad Max and takes place after a global nuclear war turned Australia into a desolate wasteland starved of resources such as fuel.

The story follows the title character Max who helps some people who have a working fuel refinery to transport their precious fuel supply away from the biker gang attacking them.

It is easy to pick apart a movie like this regarding the aspects of post-apocalyptic life that it gets horribly wrong. However, this movie illustrates how hungry a post-apocalyptic world will be for any resources we take for granted. 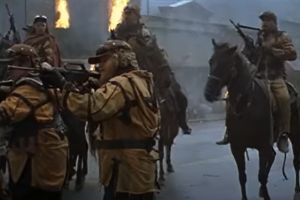 The Postman is a movie based upon the 1985 novel of the same name written by David Brin, and was released in December 1997.

I would admit that the movie is not a very good one, and the book is a far better choice if you had to choose between the two.

However, the film is still well worth a viewing because it is a decent examination of how a post-war society may structure itself and how some people may use their talents to exploit others.

The plot follows an unnamed drifter many years after an apocalypse that is never truly defined. Still, we can infer that it involved an EMP attack on the United States at the bare minimum.

⇒ Click Here To Learn How An EMP Will Affect Your State

The drifter finds a crashed US postal truck and takes the uniform of the dead driver for warmth. Before this discovery, he was trading performances of Shakespeare for food and lodging.

Now he decides to use the uniform to pretend to be a postal worker to con his way into communities so he can get food and shelter.

These are only a few of the many films that center around nuclear warfare, but each movie has something to offer the prepper and survivalist.

At the very least, it can be an excellent way to open the preparedness discussion amongst those close to us who may not have taken these threats very seriously.

Here is a very practical physical book called No Grid Survival Projects that was created to help people survive off-grid for a long period of time, after societal collapse.

⇒ 70+ Projects That Help You Survive Long-Term Without a GRID

How To Make Your Own Fuel

How We Store Sugar For Our Prepper Pantry ~ Easy Long Term Storage!