A lot of people think that nuclear war would be the end of the world.

The truth is that, except in a worst-case scenario where both the US and Russia use their entire arsenals, it wouldn’t – and even if that worst-case scenario did happen, most people outside major cities (and many in them) would survive the war itself.

If you’re well prepared it’s possible to survive the aftermath, too. However, if you want to boost your chances of long-term survival, you need to start doing the right things as soon as you know what’s coming.

If you get a warning that a nuclear attack is coming, the first thing to do is find the safest place you can. At home, if you have a nuclear shelter – either a bunker or a fallout room with an inner refuge – go there immediately. If you’re away from home find shelter as quickly as you can. 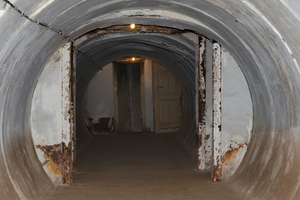 A basement, subway station or tunnel is the best option.

An inside room in a solidly built building is also good.

Outdoors, look for ditches or culverts to shelter in, but stay away from trees, bridges or anything that’s likely to fall.

⇒ What Really Happens When You Bury A Shipping Container

If you’re caught in open ground then stand there, wait, and be ready to carry out the Nuclear Immediate Action Drill.

As you wait, make sure your sleeves are rolled down and put on a hat if you have one.

The Nuclear Immediate Action drill will help protect you from the immediate dangers of a nuclear explosion. These are:

This is an intense burst of electromagnetic radiation, including ultraviolet, visible light and infrared. It is extremely bright and can last for ten seconds or even more.

The flash from a nuclear explosion has a characteristic double pulse – it flares bright, dims for a fraction of a second as the shockwave turns air to plasma and hides the fireball, then flares again, longer and more intensely, as the plasma fades.

Related: A Strange Thing That Might Save Your Life in A Nuclear Aftermath

The flash has enough energy to cause severe burns or temporary blindness miles from the explosion. Closer in it can melt steel or instantly vaporize a person.

A nuclear explosion also sends out a pulse of high-energy gamma rays – but this is only dangerous out to around a thousand yards, so unless it’s a very small weapon the chances are anyone close enough to be harmed by prompt radiation is either in shelter solid enough to shield them from it, or will be instantly killed by the thermal pulse. 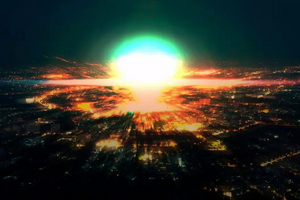 As the shockwave expands out from the weapon it compresses the air in front of it, creating sudden very powerful winds.

When the shockwave finally exhausts itself the atmosphere rushes back in to equalize the pressure, producing a second, weaker but still dangerous, blast wave in the opposite direction.

Related: How Far Away Would You Need To Be To Survive A Nuclear Blast?

The IA drill itself is very simple, but you need to do it as quickly as you can. Here’s what to do:

Stand and wait for the flash.

Fallout is just debris that’s been sucked through the weapon’s fireball. Depending on whether the fireball touched the ground or not, a nuclear explosion can create anywhere from a couple of hundred pounds to tens of thousands of tons of fallout.

Related: How To Make Your Home Fallout Proof 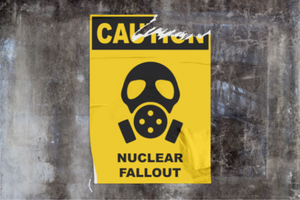 It looks like fine sand, and it’s dangerously radioactive. While fallout can be blown high into the atmosphere and not fall back to earth for weeks – by which time its radioactivity will have decayed to a fraction of what it was – heavier particles and any that was thrown out sideways will start coming down within minutes of the blast.

If you’re at home when the attack happens, stay as far away from outside walls and the roof as possible. Get into a room that doesn’t have broken windows or other damage.

If all your windows are broken quickly seal one room with stacks of books, sandbags, heavy furniture or other dense material. If you’ve prepared a fallout room stay in the inner refuge for at least 48 hours, and in the fallout room for two weeks if possible.

⇒ Do You Know Why You Should Never Put A Tall Fence Around Your House?

For anyone caught in the open it’s vital to get into shelter as soon as possible. If you can get home inside five minutes, do that. Otherwise get into the least damaged building you can find.

Cover your nose and mouth with a mask or layers of clean, tightly woven cloth. If you can find heavy, ideally waterproof, clothing put it on. Rain boots, gloves and a hat will help too.

Then look outside. If you can see fallout coming down wait until it stops. Then get home as quickly as you can, but without kicking up dust. If you can get a vehicle, turn off the heater and A/C and close the air vents.

When you get home, take off your clothes before you go inside. Leave contaminated shoes and clothes outside. Before going into your fallout room brush your hair thoroughly to get any dust out of it. Then put on clean clothes.

As quickly as you can, turn off gas and electricity supplies to cut the risk of fire. There will probably still be water in the system so fill any containers you can and put them in your fallout room, along with all the food and survival gear you can access without going outside.

After two weeks the fallout’s radioactivity will have decayed to less than 1% of its initial level – enough that you can leave the fallout room and make short trips outside. In a month it will be safe to move around normally.

At that point you can get on with the business of surviving. It will be hard, but if you did the right things in the minutes and hours after the attack you have a fighting chance of making it.

Survival Kits 101: The 10 Items YOU Should Have At A MINIMUM

5 Lies You Where Told About Prepping! #Shorts