Whether you love them or hate them, modernized or so-called “tactical” lever action rifles have skyrocketed in popularity in recent years. We can attest that our own Marlin 336 Dark Series project is a ton of fun to shoot, but it still has a few downsides. The magazine tube can only hold five rounds, it must be reloaded one round at a time, and the manual of arms is substantially different from a modern semi-auto rifle, leading to a steep learning curve. At SHOT Show 2023, we found a new Bond Arms lever action rifle that fuses this classic operating mechanism with the ergonomics, capacity, and modularity of an AR-15. The Bond Arms lever action AR lower can be used with any milspec AR-15 upper, feeds from an AR-15 mag, and accepts a variety of Remington 870 shotgun stocks. 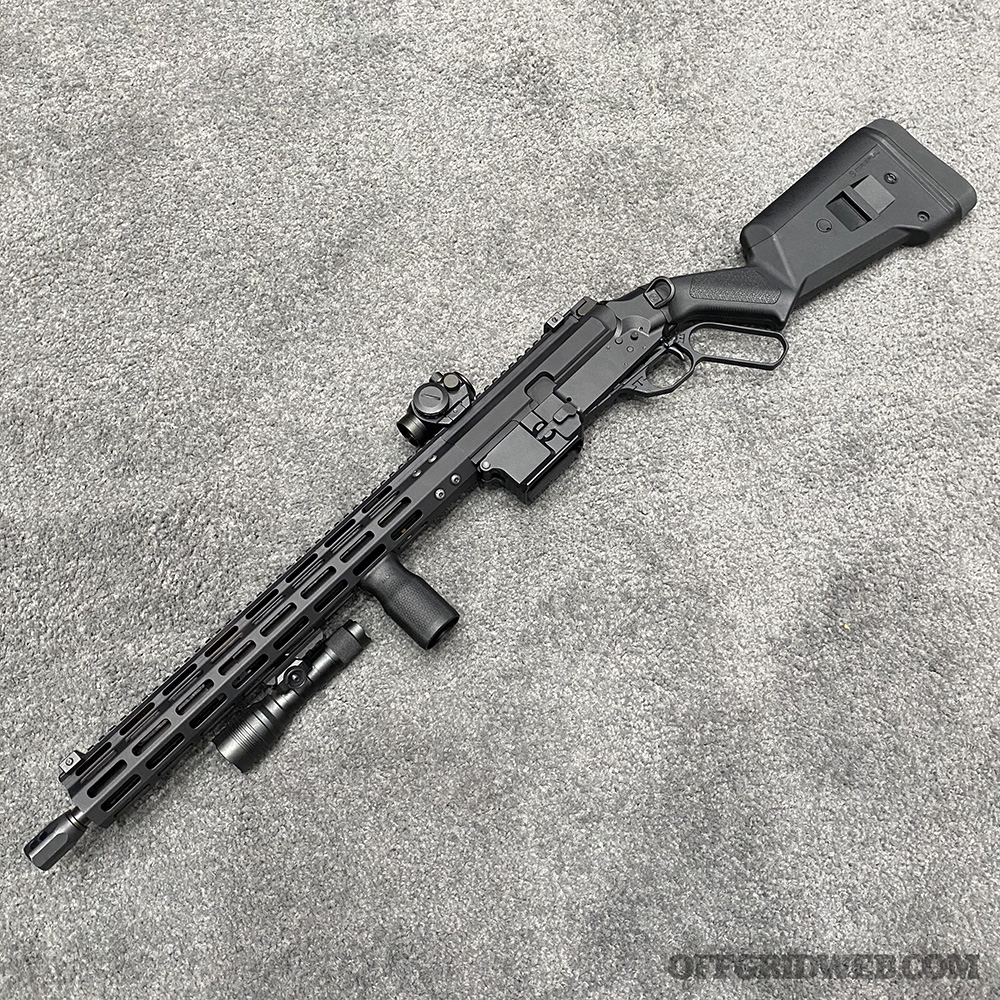 Bond Arms is a Texas-based gun manufacturer that has been around since 1995, but they’re not typically associated with rifles. The company primarily makes Derringer-style double-barrel handguns. So, when we walked by the Bond Arms booth at SHOT Show this week, we were surprised and intrigued to see the lever gun pictured above on a table surrounded by handguns. We immediately asked for more information and were directed to the rifle’s designer, who gave us a detailed run-down of its features. To be clear, this rifle is still in a pre-production prototype phase, but Bond Arms tells us they’ve been testing and refining it for more than a year already. It’s not the first lever-gun-meets-AR project we’ve heard of — the FightLite Herring Model 2024 comes to mind — but it certainly seems like a major step forward in this category.

Starting from the top, it accepts a standard AR-15 upper receiver. Bond Arms says it has been proven to work with everything from a .223/5.56mm upper all the way up to a .50 Beowulf upper. Most of us already own multiple AR upper receivers that can be used with the Bond Arms lever action lower.

Moving on to the lower receiver, this is where it gets really interesting. There’s a push-button safety similar to what you’d find on a lever gun, and a unique mag release that extends rearward to offer easy access to the shooter’s index finger. The front portion of this mag release — the part where a regular AR mag release button would be — can also be pressed directly to drop the mag. On the opposite side of the receiver, there’s another mag release button for ambidextrous use. The mag well is flared for quick reloads; we tested its retention and release with a 30-round PMAG. 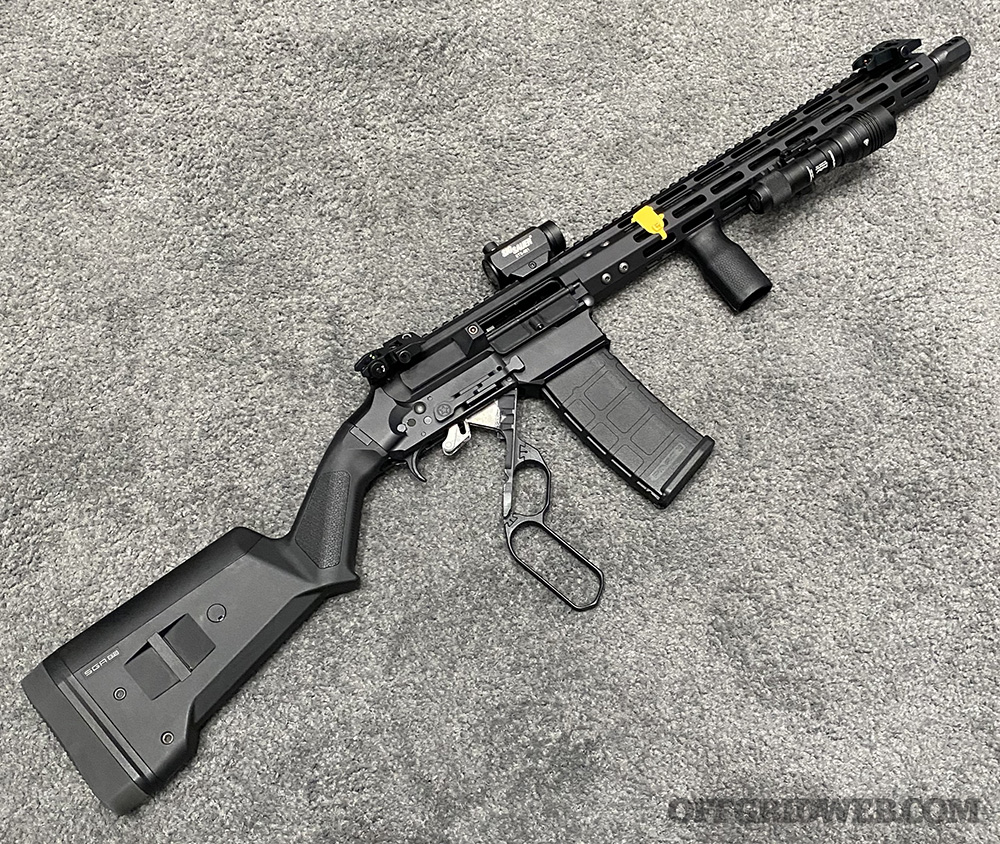 The most surprising part of the Bond Arms lever action AR is the lever mechanism itself. According to the designer, it uses an asymmetric cam that rides in a track (the slotted silver piece protruding from the receiver in these photos). This allows the leverage applied to the bolt to increase at points where more force is needed, such as while feeding a round from the magazine. Bond Arms says this complex cam mechanism wasn’t necessary for 5 or 10-round mags, but feeding the first few rounds from a full 30-round mag created more resistance and required more leverage for smooth operation.

There’s also a secondary “grip safety” built into the lever — in order for the rifle to fire, the lever must be squeezed lightly against the stock. This functions similarly to a 1911 grip safety, only reversed to the front of the grip. We were able to handle and dry fire the lever gun prototype, and found it to be smooth and easy to use. Compared to a traditional lever gun, this rifle has a noticeably shorter throw that lends itself to rapid fire. The only time we noticed the grip safety mechanism was when we attempted to press the trigger without touching the lever; it worked as intended and prevented the rifle from firing. Another ingenious aspect of this design is the interchangeable lever loop. Bond Arms realized that some users prefer large loops for use with gloves, while others prefer more traditional small loops. They also wanted to allow users to swap to various Remington 870 shotgun stocks, such as the Magpul SGA 870 stock and Hogue Overmolded stock pictured here — this would require different loop shapes to match the contour of the grip. The solution was simple: make the the loop and trigger guard a separate piece from the internal part of the lever. The loop attaches to the gun via two dovetailed sections around the trigger guard. 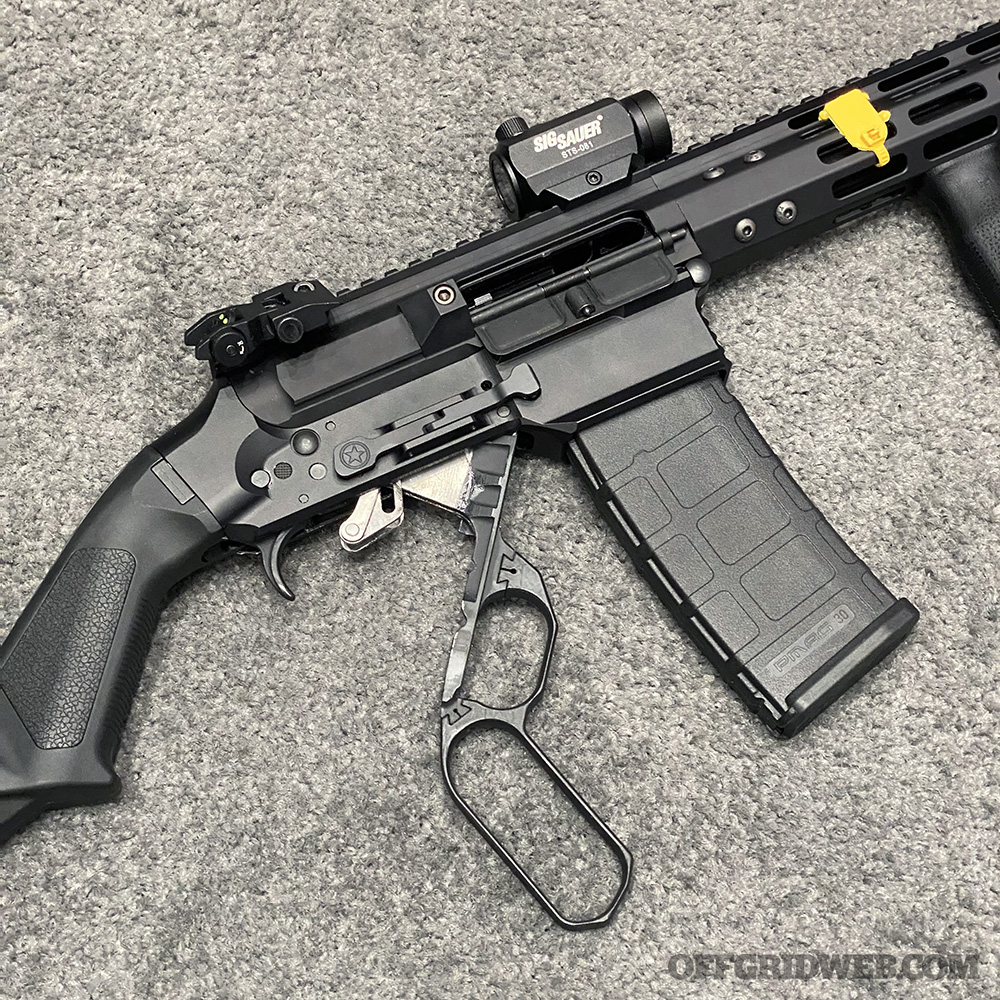 This modular design allows the user to easily swap lever loops (and stocks) without affecting the rifle’s internal mechanism or requiring gunsmithing work.

We haven’t had a chance to shoot the Bond Arms lever action AR yet, but we hope to get our hands on one soon for a thorough review. Bond Arms told us their goal is to release the retail version of this lever gun by this time next year (i.e. January 2024) at an MSRP of $1,500. Obviously, the price and time frame are not set in stone at this point. For more information, keep an eye on BondArms.com or follow the company’s Instagram @BondArms_.